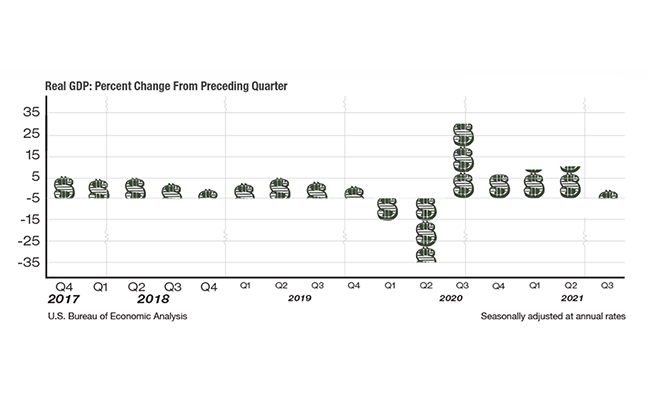 The first half of 2021 saw greater increases in Gross Domestic Product (GDP), a measure of overall spending throughout the United States, than what has been experienced over the previous four years, with the exception of the highly turbulent spending found throughout the country in the second and third quarter of 2020 in which the pandemic initial hit the United States and recover began respectively. The most recent update (at the time of publishing) shows a GDP increase of 6.7% in the second quarter of 2021 and a 2% increase in the third quarter.
In their latest GDP data release, The United States Bureau of Economic Analysis (BEA), accredited the growth in GDP to the rise in private inventory investment, personal consumption expenditures (PCE), state and local government spending, and nonresidential fixed investment.
More specifically, "The increase in private inventory investment reflected increases in wholesale trade (led by nondurable goods industries) and in retail trade (led by motor vehicles and parts dealers). The increase in PCE reflected an increase in services that was partly offset by a decrease in goods. Within services, increases were widespread with the largest contributions coming from "other" services (mainly international travel), transportation services, and health care. The decrease in goods primarily reflected a decrease in spending on motor vehicles and parts. The increase in state and local government spending was led by employee compensation (notably, education). The increase in nonresidential fixed investment reflected an increase in intellectual property products (led by software) that was partly offset by decreases in structures and equipment."


Non-Residential
2022 is going to be a year where everything is going to cost more. America leads the world in and bears the largest burden in dealing with the climate issues and the current political environment is facilitating higher fuel and labor costs, higher corporate and capital gains taxation and the implementation of new and retro planning restrictions. California's zoning override will precipitate an abundance of lawsuits, the results of which will reverberate across the country. The actual new spending elements of the infrastructure bill will add to non-residential construction, and an abundance of migrant labor will keep residential construction moving forward . . .

Architecture Billings Index
The ABI, a leading economic indicator for nonresidential construction activity, showed growth throughout 2021. The American Institute of Architects (AIA) reported the 56.6 ABI figure in September was an increase of 1.0 from August which reflects an overall strong year for ABI throughout 2021. Additionally, AIA found architecture firms have been increasing their investment in technology to aid in communication, collaboration, and project management.

Total Nonresidential Construction Spending
Total spending on nonresidential construction dipped 5.8% for the same reporting period last year with a loss of 1.2% month-to-month. The Dodge Momentum Index, a measure of nonresidential building projects in planning per month, rose 11% with both components increasing: commercial planning up 13% and institutional up 8%.


Infrastructure
Infrastructure Development
With the recent developments of the $1.2 trillion Infrastructure Bill, Infrastructure Investment and Jobs Act, major industry associations have announced their support of the legislation.
The American Society of Landscape Architects explained how the bill creates new programs that will create opportunities for Landscape Architects to lead projects throughout the nation, including the Healthy Streets Initiative, and programs to eliminate invasive plants, create habitat for pollinators on highway rights-of-way, plan and design wildlife crossings, and more.
The National Association Home Builders supported the bill in saying, "NAHB supports the $1.2 trillion bipartisan infrastructure bill, which will make much-need improvements to the nation's roads, bridges, broadband and public transportation network... It contains several provisions that will boost housing affordability, including one sought by NAHB mentioned above that will restore an exemption for water and sewer contributions in aid of construction. The National Recreation and Park Association also supports the bill as they specifically commended the increase in funding for the Clean Water State Revolving Fund, which is the primary federal funding mechanism for green infrastructure projects.

Transportation
AASHTO executive director Jim Tymon communicated the associations eagerness to development American communities in saying, "AASHTO and state DOTs look forward to working with our partners at USDOT to implement the law as soon as possible. State and local transportation agencies are eager to get to work on the multi-modal projects that will provide real benefits to the people of every community across the country.

Conservation
The Infrastructure Investment and Jobs Act is said to reauthorize and replenishing the Abandoned Mine Land Trust Fund, which will establishing the Wildlife Crossings Pilot Program and provide unprecedented funding for hydro connectivity projects and water management.

"Congress is empowering the creation of thousands of high quality non-exportable American jobs while ensuring programs and policies support the optimization of services that our unique ecosystems provide nationwide for all citizens such as flood attenuation, clean air and clean water," said Ron Regan, Executive Director for the Association of Fish & Wildlife Agencies (AFWA). "State fish and wildlife agencies stand ready to work with their state and federal agency partners in implementing the important conservation provisions in this historic Act." Furthermore, AFWA is pleased with the $11.3 billion funding toward the Abandoned Mine Land Trust, $1 billion in funding for hydro connectivity projects and aquatic organism passage, and $350 million in competitive grants for wildlife crossings structures.
https://www.fishwildlife.org/landing/blog/association-applauds-passage-bipartisan-infrastructure-package-and-additional-conservation-funding

Water Supply
The American Water Works Association (AWWA), considered the largest the largest nonprofit, scientific and educational association dedicated to managing and treating water, applauded the passing of the infrastructure bill as they found that upgrading the nation's water infrastructure was critical to improve public health, the environment and the economy. AWWA's press release read, "By reauthorizing the Water Infrastructure Finance and Innovation Act and doubling funding for the drinking water State Revolving Fund, the federal government is helping states and local water providers to spur on critical water projects." Additionally, the association ran a report in 2012 which determined $1 trillion was needed to repair and expand drinking water infrastructure for the next 25 years. Therefore, "The passage of the infrastructure bill is a tremendous step forward in meeting that challenge and assuring safe, reliable and affordable water service."
https://www.awwa.org/AWWA-Articles/awwa-statement-on-the-passing-of-the-infrastructure-investment-and-jobs-act


Non-Residential
Manufacturing
A press release from the National Association of Manufacturers (NAM) displayed concern over the Build Back Better Act in the U.S. House. The association's CEO, Jay Timmons, explained, "This bill, regardless of its intentions, is paid for by taxes that will hit manufacturers harder than other industries. We oppose this legislation that would stifle our ability to expand our operations, hire more workers and raise wages and benefits." Timmons pointed to the pandemic and the need for manufacturers to help lead economic recovery as a major point in the opposition to the bill. He continued by referencing the tax reforms of 2017 as they gave manufacturers the tools to invest in people and communities. According to NAM, this lead to 2018 being the best year for manufacturing job creation in more than two decades. "We should build on that progress-not return to archaic tax policies or target manufacturers with new taxes."
https://www.nam.org/reconciliation-bill-puts-tax-target-on-manufacturers-15739/?stream=news-insights

Office
Vacancy rates throughout the United States have increased by an average of 12.4% in the third quarter according to the Statista Research Department. They reported, "The vacancy rates across all categories are expected to remain at around 15 percent until employment fully returns to pre-coronavirus levels. The COVID-19 pandemic has changed the way that companies operate, and working from home has become the new normal for many employees in the United States."
https://www.statista.com/statistics/194054/us-office-vacancy-rate-forecasts-from-2010/home/20211012005862/en/Amusement-Parks-Global-Market-Report-2021---ResearchAndMarkets.com


Amusement and Recreation
From 2015 to 2020 amusement parks decreased in value by an average of 0.3% per year, according to Businesswire, but the value is expected to grow through 2025 by an annual average of 11.5% with the theme park segment expected to be the fastest growing with that market.
https://www.businesswire.com/news/home/20211012005862/en/Amusement-Parks-Global-Market-Report-2021---ResearchAndMarkets.com


Residential
Total Residential Construction Spending
The value of construction put in place saw growth with an increase of 7.1 percent from September of last year as total private construction is up 11.3%. Total public construction however was down 5.5% with drops in the largest subsectors: public safety at -33.3% and conservation and development at -19.5%.

New Home Sales
The not seasonally adjusted new home sales dropped by 1% year to date which was led by the 8.8 decrease in the West region. The other three regions all increase in new home sales. The nation saw a strong beginning to the year as January through May resulted in the strongest months of 2021, but June through September where all lower than any of the first five months. The average sale price for new homes increased from $405,100 in September 2020 to $451,700 in September 2021.

Existing Home Sales
According the National Association of Realtors, existing home sales increased by 0.8% in October. However, in October 2022 that measure fell by 5.8%. Regionally, the Midwest grew by 4.2% and the South by 0.4%. The Northeast drop by 2.6% and the West held steady with no change from the previous month.

Lawrence Yun, National Association of Realtor's chief economist said, "Home sales remain resilient, despite low inventory and increasing affordability challenges. Inflationary pressures, such as fast-rising rents and increasing consumer prices, may have some prospective buyers seeking the protection of a fixed, consistent mortgage payment."
The Pending Home Sales Index (PHSI), a forward-looking indicator of home sales based on contract signings, decreased 2.3% to 116.7 in September. Year-over-year, signings decreased 8.0%. "Contract transactions slowed a bit in September and are showing signs of a calmer home price trend, as the market is running comfortably ahead of pre-pandemic activity," said Yun. "It's worth noting that there will be less inventory until the end of the year compared to the summer months, which happens nearly every year. Some potential buyers have momentarily paused their home search with intentions to resume in 2022."
https://www.nar.realtor/newsroom/existing-home-sales-inch-up-0-8-in-october

Building Permits
Privately-owned housing units authorized by building permits increased by 20% year-to-year with improvements in single-family (17.3%), two to four units (11.1%), and in five units or more 27.3%).

Starts
With an 17% gain year-to-year, single-family unit starts increased by 16.7% but residences with two to four units were down 1.3% for the same period last year. Regionally, the Northeast saw the largest growth with a 30.2% increase total starts, followed by the West with 20.4%, South with 15.2%, and Midwest with 10.7%.

Completions
Total year-to-year growth came in at 4.2% with single-family units up 6.4%, but the two to four housing unit measure fell by 28%. The Northeast and South regions experience increases of 21.1% and 7.1% respectively, but the Midwest fell by 0.6% and the West dropped by 3.7%.

Final Words
Dodge Data and Analytics reported that October was a big month for construction as total construction went up 16% and non-residential building starts saw an increase of 29%.
"Economic growth has resumed following the third quarter's Delta-led slowdown. However, the construction sector's grip on growth remains tenuous," stated Richard Branch, Chief Economist for Dodge Construction Network. "Long term, construction starts should improve, fed by an increase of nonresidential building projects in the planning pipeline and the recent passage of the infrastructure bill. Both will provide meaningful support and growth to construction in the year to come. This expectation, however, must be tempered by the significant challenges facing the industry: high prices, shortages of key materials, and the continued scarcity of skilled labor. While healing from the pandemic continues, there's still a long road back to full recovery."
Lawrence Yun, the Chief Economist with the National Association of Realtors, explained the housing side of the 2021's economic performance as noted the housing sales have remained resilient despite issues with affordability and low inventory. Yun also noted changes in workforce environments have had an effect in the housing market, "Among some of the workforce, there is an ongoing trend of flexibility to work anywhere, and this has contributed to an increase in sales in some parts of the country," said Yun. "Record-high stock markets and all-time high home prices have worked to significantly raise total consumer wealth and, when coupled with extended remote work flexibility, elevated housing demand in vacation regions." 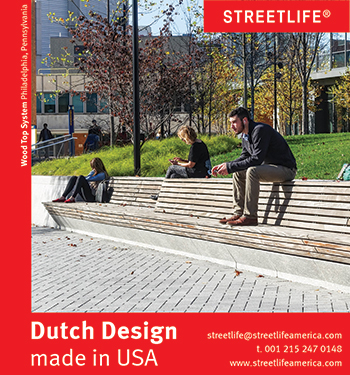 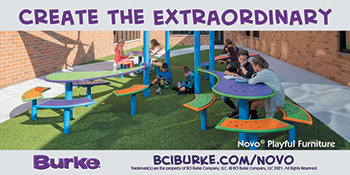 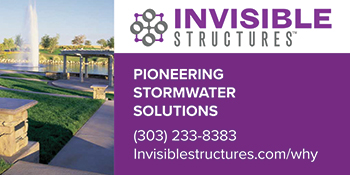 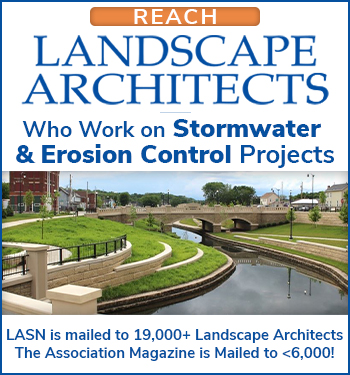 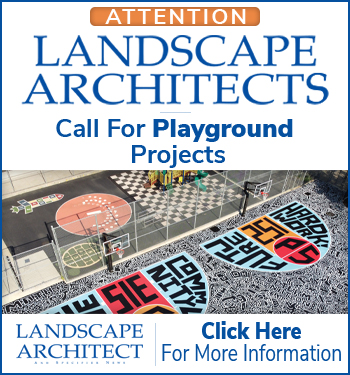 Infrastructure investment to be used to remove oil and gas well sites in national parks.