At The End Of The Paseo

The paseo design is inspired by a creek that was once on the site
by Benjamin Heim and David Fletcher, Fletcher Studio 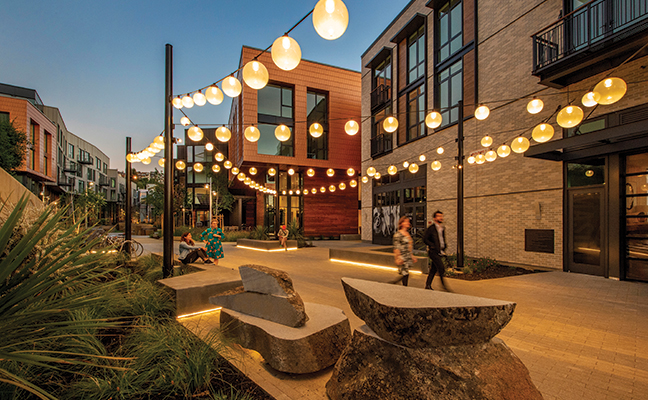 The design for the central passage at the Potrero Hill neighborhood in San Francisco, California was inspired by the creek that was once located on the site and still runs beneath it. The entry plaza leads visitors into the new neighborhood.
2 / 10 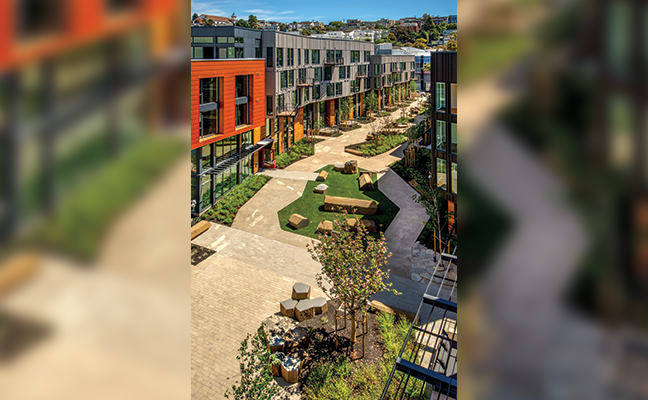 Natural stone boulders were carefully sourced and cut to create casual seating throughout the passages.
3 / 10 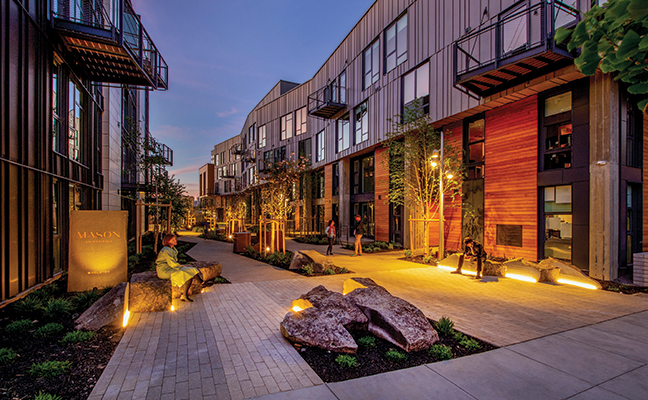 This night view of the plaza at 18th Street shows how the ends of the passages act as 'spatial deltas' that are marked by monumental cut basalt columns.
4 / 10 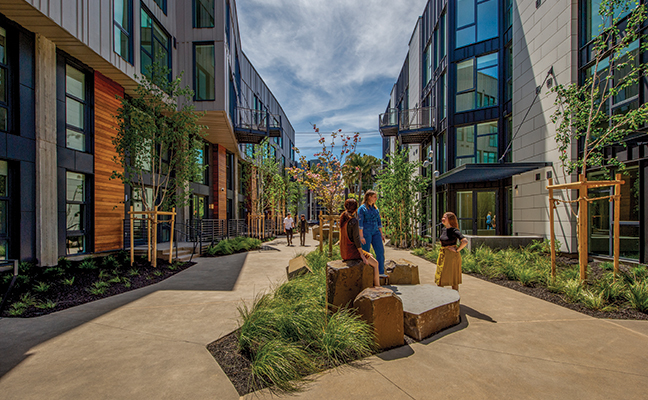 Boulders are arranged throughout the passageway to create a series of basalt logjams, similar to creeks, creating areas of play and discovery.
5 / 10 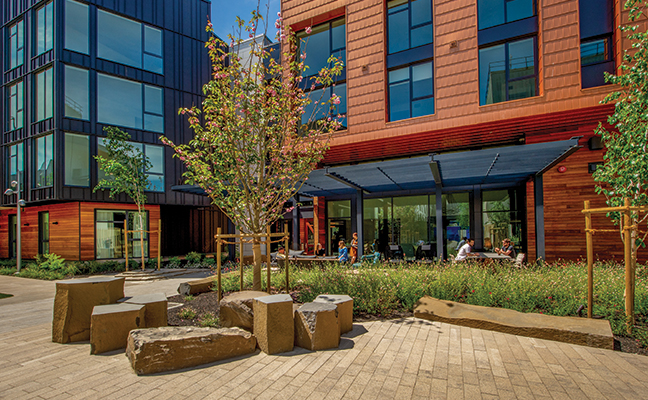 Boulders are arranged throughout the passageway to create a series of basalt logjams, similar to creeks, creating areas of play and discovery.
6 / 10 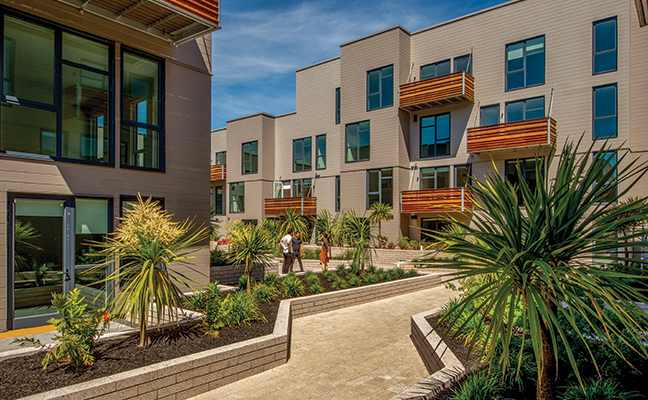 Along access paths, a series of weirs retain water until critical mass is reached, at which point water flows down the planters, transferring excess water to the city storm drain.
7 / 10 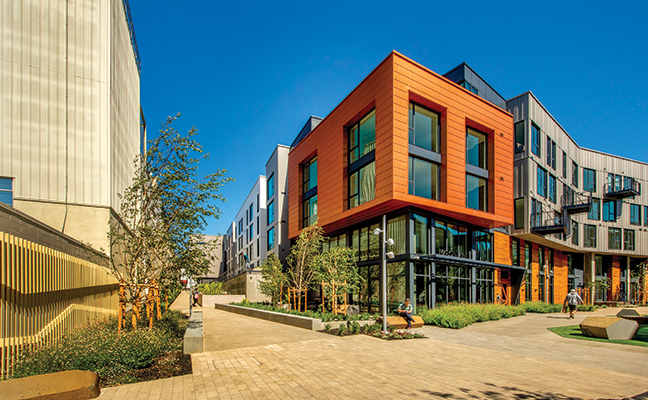 At the confluence of the two public passages lies a plaza with a variety of casual meeting and gathering spaces.
8 / 10 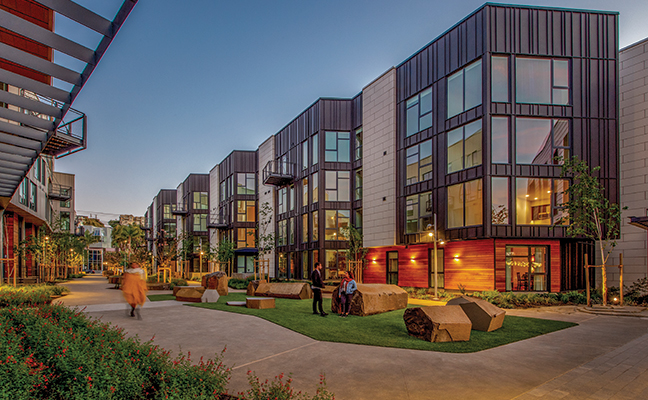 Building Two offers a series of community gathering spaces along its corridor.
9 / 10 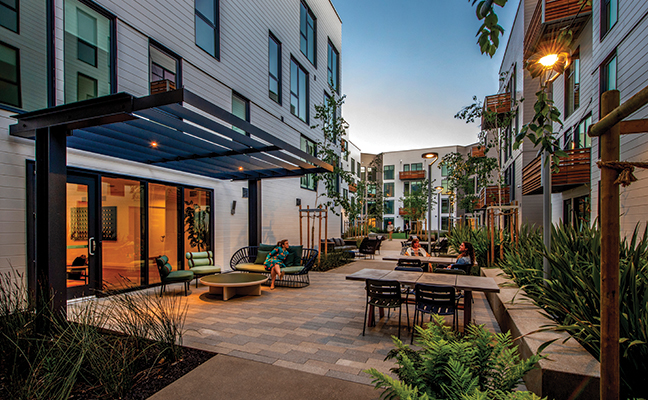 A historical creek is reimagined as a public passage that weaves through a series of casual seating and play areas.
10 / 10 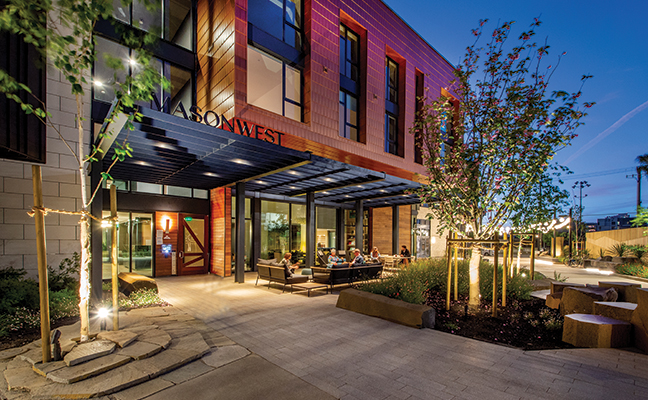 Different typologies of hardscape materials are deployed to create an environment similar to a creek bed.

This project is a public paseo that connects the Potrero Hill neighborhood to Jackson Park between Mariposa Street and 18th Street, flowing through a new mixed-use housing development.
The paseo design is inspired by a creek that was once on the site, as it borrows its form from that creek. Two paths meander through the site, varying in size as they cut back and forth between planting, plazas, and walkways to create two independent ‘tributaries’. Natural stone is found throughout, creating eddies and places to rest. The paseo features regional stone that has been dynamically cut and reconfigured to create natural sculptures that define a series of ‘social eddies’ and confluences.

At the heart of the project, where the east-west passage intersects with the paseo, a conceptual logjam occurs at the confluence of these two tributaries. Here, several massive basalt columns fall over and break apart to create spaces to meet and gather. The continuous north-south flow is interrupted and scattered to create an opening.
The Mariposa Street and the 18th Street plazas, at each end of the paseo, act as ‘spatial deltas,’ and feature custom lighting and cut stone. The north and south entries are marked by custom fabricated basalt columns. These monuments use a combined flamed and engraved surface to distinguish themselves and use lighting to illuminate each surface and reflect the engraved and painted lettering.
The pattern of the large fence was dubbed ‘mountain’. The idea picks up on Potrero Hill's adoration of “The View” atop the hill. With the greenway terminating at the bottom of the hill next to Jackson Park, the design team sought to create a play on “The View” and bring the skyline, hill, and mountain outlines to the lowlands. The fence is made of wood and is Cradle to Cradle Gold Certified, acetylated pine.
Throughout the project a number of lighting strategies were utilized. A series of linear fixtures are embedded in the paving to graze the surfaces of cut stone elements, illuminating seating options, and aid wayfinding. Overhead, a series of pole mounted fixtures provide supplemental lighting, intermingling with rows of Birch and Cherry trees that striate along the paseo.
At the northern end, a large plaza opens where the paseo meets Jackson Park. The northern plaza uses a catenary system where ethereal bubbles weave past each other warming the plaza. They are inspired by will-o'-the-wisps, the atmospheric lights that might have hovered above the historic marsh at Jackson Park, across the street. The lighting also allows for dramatic shadow play along the custom designed fence that pulls the geometry of the horizontal circulation onto a vertical plane. The overall lighting strategy includes a diverse set of fixtures to avoid repetition. Wall sconces, pedestrian poles, uplights, soffit lights, linear lights, and custom catenary lights help meet required light levels and result in a symphony of nocturnal experiences.
The design uses careful fixture selection to enhance the design's conceptual underpinnings and the site's history. The project's lighting design is tailored to the site's furnishings, dramatic use of cut stone, large swaths of perennials, rows of trees and lighting, and custom signage to create an inviting passageway connecting neighborhoods, schools, and homes to each other and Jackson Park.
Collectively, the project uses a series of historical, contemporary, and natural materials and experiences to tie together a sequence of spaces and experiences that connect neighborhoods. 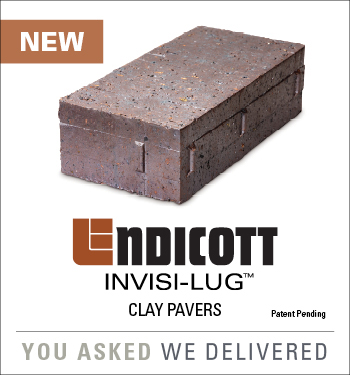 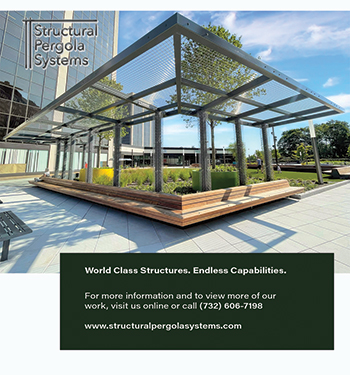 Scale Bugs in the Landscape

Though the Housing Market Remains Weak, the NAHB has Reported a Slight Uptick During December

APA Partners with The National League of Cities