Main article by James Smoot, assistant regional hydrologist with the USGS Virginia Department of Conservation and Recreation. Division of Soil and Water Conservation. Contributions and quotes from Jerald S. Fifield, CPESC, a hydrologist for Hydrodynamics Incorporated of Parker, Colo.

Two hydrologists offer opinions and examples of the benefits and dangers of using straw bales for sediment control.

According to hydrologist James Smoot, a straw bale barrier is a temporary entrenched and anchored barrier used to intercept sediment-laden runoff and to provide some retention of sediment from small drainage areas. A straw bale barrier can be used to promote sheet flow and to reduce runoff velocity, reducing erosion and improving water quality.

The expected life span of the average bale is about three months, therefore straw bales must be replaced or a new barrier placed directly upslope of the old bale when a barrier is required for longer time periods. An average straw bale should be 30 inches in length, weigh at least 50 pounds, and contain five cubic feet or more of material. The bales can be used for sediment protection in disturbed areas to control sheet and rill erosion and/or in minor swales or ditches to help trap sediment-laden runoff.

Jerald S. Fifield, hydrologist for Hydrodynamics Inc., says that straw bales might reduce the flow velocity of water in drainage channels–but only if we’re assuming that they do not fail. He agrees that a bale’s life span is about three months, but only in a humid region. In arid areas the bales may last up to three years, says Fifield who adds that the use of bales for slope protection should be avoided.

According to Smoot, straw bale barriers may be used for areas draining one acre or less or where runoff water velocities are not expected to exceed two cubic feet per second. “Never use straw bales on drainage channels unless they will be well maintained and inspected after a runoff event,” Fifield adds.

A four to six-inch deep trench should be excavated to the length of the barrier and the width of the bale, (see diagram at top). Excavated material is to be placed on the upstream side of the trench. Wire or string-bound bales containing a minimum five cubic feet of either hay or straw are placed in the trench and should be anchored with two by two-inch wooden stakes placed at each end or with rebar steel pickets driven through the bale into the underlying soil at a slight upstream angle (see the diagram below), to help prevent the bale from overturning. 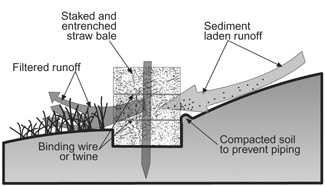 Trench Installation: Bales should be anchored with two by two-inch wooden stakes placed at each end or with rebar steel pickets driven through the bale into the underlying soil at a slight upstream angle.

The first stake should also be driven slightly toward the previously laid bale to force them together. Spacing between the bales should be tightly chinked with loose straw (see diagram at top). The excavated soil can now be backfilled firmly against the upslope side and compacted. “This sounds good,” says Fifield, “but is almost never done correctly.”

Smoot instructs that when using straw bale check dams in swales or ditches, the barrier should be placed perpendicular to the contour. The same installation procedure is followed with the barrier extended up the sides of the ditch until the tops of the end bales are higher than the top of the lowest middle bale (see the diagram below). This will prevent scour due to flow around the ends of the barrier.

Are bales a bad idea?

But before you install a straw bale structure to minimize sediment loss on your project, consider more opinions from veteran erosion control professional, Jerry Fifield, who says that there is tremendous abuse of the use of straw bales as a “best management” practice. Fifield, who is a lecturer for the IECA, says that in most cases, the time and money spent on straw bales would be better spent on more effective and less costly alternatives, like establishing vegetation or installing erosion control blankets. Fifield has found that the use of bale barriers is one of the most expensive “best management practices” when one considers the cost associated with maintenance and repair.

Typically, he says, illustrations of a straw bale barrier show storm water, laden with sediment, flowing into the bale. The bale, in turn, is supposed to filter out soil particles and discharge sediment-free storm water to flow downstream. The problem is, says Fifield, “straw bales don’t work that way. I’ve seen storm water runoff go around, between and under straw bales, but I’ve never seen storm water flow through a straw bale.” 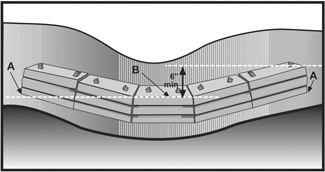 Proper Placement: To prevent flow around the ends of the barrier, make sure the tops of the end bales are higher than the top of the lowest middle bale.

“That’s true,” Says Smoot, “With bales or silt fences, it’s not that they are meant to filter the water. What they do is slow the water so that gravity has a chance to pull the sediment back down to the earth surface.”

Of course bales are not as good as preventing erosion in the first place, or as effective as using erosion control mats or planting vegetation, says Smoot. “But it’s hard to have construction going on and have everything vegetated at the same time.”

After you get your developing project area to final grade, then you can sod, seed (which takes time to establish) or use mat (more expensive) or rip-rap on steep slopes, says Smoot. “In the mean time, when you’re grading and disturbing the earth, straw bale barriers provide some level of protection.”

The key to using bales correctly is in knowing where and how to use them. Fifield says the only proper use of straw bales is to build a dike, causing storm water runoff to pond where it is likely to pond, anyway. The pond allows water to stand long enough for much of the sediment to settle out. That would include the flatter areas in front of the toe of a slope. Smoot agrees that bales are best used in relatively flat areas and not on steep slopes. “If you install a straw bale properly across a drainage channel, you reduce the cross sectional area of the channel,” he explains. “In response, the velocity of the storm water flow must increase. As that velocity increases, so does the potential of erosion until the area around the straw bale erodes enough to enlarge the channel’s cross sectional area to reach equilibrium. That’s why you often see little gullies form around or under straw bale check dams. If you’re using straw bales in a channel to trap sediment, you’ve probably done something wrong,” says Fifield. “The place to trap sediment is where water ponds. A straw bale structure will temporarily dam a channel. But, it won’t provide enough resident time for the water to pond and for the sediment to settle out.”

After all sediment-producing areas have been permanently stabilized, all sediment accumulation at the barrier trap should be removed, and all excavation should be backfilled and properly compacted. Smooth the site to blend with the terrain or as specified on plans.

Main article by James Smoot, during his tenure as Professor of Environmental Engineering at University of Tennessee.

If straw hay bales will not work for your application, consider these alternatives:

Soil erosion is the process of detachment and transportation of soil materials by water, wind, ice and gravity. While “geologic” erosion naturally produces about 30 percent of the total sediment in the U.S., “accelerated” soil erosion from man’s use of land (mining, forestry, agriculture and construction) accounts for the remaining 70 percent.

Find out more about everything from soil, water and land conservation to detailed ESC (erosion and soil conservation) specs from the Virginia Department of Conservation and Recreation at www.dcr.virginia.gov. 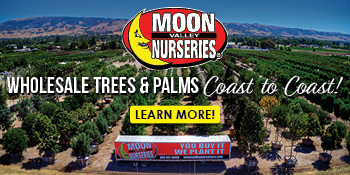